From Beyond Angkor
Jump to navigation Jump to search 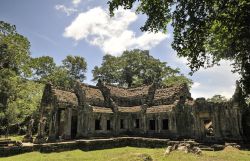 Prasat Preah Khan (ប្រាសាទព្រះខ័ន - Pronounced: Pra-saht Prayer Khan!), forms a pair with the similarly designed, decorated and dated Prasat Ta Prohm (Siem Reap). The 2 vast temple sites are even in a similar state of repair (or disrepair) and both feature the iconic sprawling ficus (strangler fig vine) roots and towering silver cottonwood trees. (The latter are impressive although, as a member of the kapok family, they are very fast growing.)

Ta Prom was dedicated to Jayavarman VII's mother, Preah Khan to his father Dharanindravarman II, while one of the numerous inscriptions found at the site claims the temple was constructed on the site where the king finally defeated the Cham army to liberate his city at the end of the 12th-century. (The temple was consecrated in 1191 under the name Nagarajayasri or Temple of the Sacred Sword.)

Both sites are flat, east-facing temples with complex multiple enclosures and myriad minor shrines. Preah Khan, however, does possess certain features that the slightly smaller Ta Prom doesn't. These include a huge associated reservoir, the Jayatataka Baray or Veal Reach Dak, which features a landing stage and terrace aligned to the long eastern entrance causeway while the temple's outer wall, inside the moat, displays a series of no less than 68 garuda images, protecting the site. Another unusual feature is the 2-storey construction with rounded pillars, located in the temple's northeast quadrant. A similar building remains at Prasat Bayon although its original purpose is uncertain.

The central area lacks Ta Prohm's inner moat but shows a similar, confusing mass of interconnecting corridors, intact or ruined shrines and secondary pavilions with a central, 5 shrine quincunx layout. Blocked corridors and impassable doorways add to the confusion - or some would say the charm - so we're hoping the current restoration efforts are more restrained than at Ta Prom for example.

A lesser-known, but fascinating feature to look out for, is a pair of devata reliefs said by locals to represent - and even house the spirits of - Jayavarman VII's wives, Indradevi and her sister Jayarajadevi. These can be found to the north of the eastern central tower. Turn north instead of entering the central shrine itself and you'll pass under the iconic 'hole in the roof with giant cottonwood tree' view. Turn right and you'll enter a tiny shrine with a carved devata on the opposite wall. (Note this is an active site of worship so show respect and ideally remove your shoes!) Although originally a standard devata relief this image is said to represent Indradevi while if you peek through the window to the right you'll see an even more hidden image claimed to be a likeness of Jyarajadevi. (Legend says if you want your visit - and photographs - to be a success you must first pay homage to the queens!)

If you would like to upload additional images to the gallery, please refer to the Upload Instructions guide

A collection of historic photographs, artist sketches, maps etc. (Please ensure that anything you do upload is free of copyright and/or you have permission from the original photographer/artist/author to share)

Links to additional resources such as articles, websites, videos etc.